VILSHULT is an IKEA ready-to-hang photo of Amsterdam that has been sold over 427,000 times. After many of my friends asked me why I bought such a “mediocre” photo for my living room, I decided to find out how this photo was made and how it ended up on IKEA’s shelves and in almost half a million households. What I learned was fascinating.

I made the 14-minute documentary short film above about my quest to learn the story behind this popular IKEA photo of my hometown.

More of the backstory at Petapixel: The Story Behind That IKEA Photo of Amsterdam.

An amazing collection of visual mashups created by the French creative agency: Les Creatonautes. I particularly like the flying fish, the bittersweet toad, the meow meow, the Lobster hipster or Hipster lobster or Hipslobster or Lobshipster?, the Balldog, and of course the Donald Trump + Neymar Jr = David Lynch. 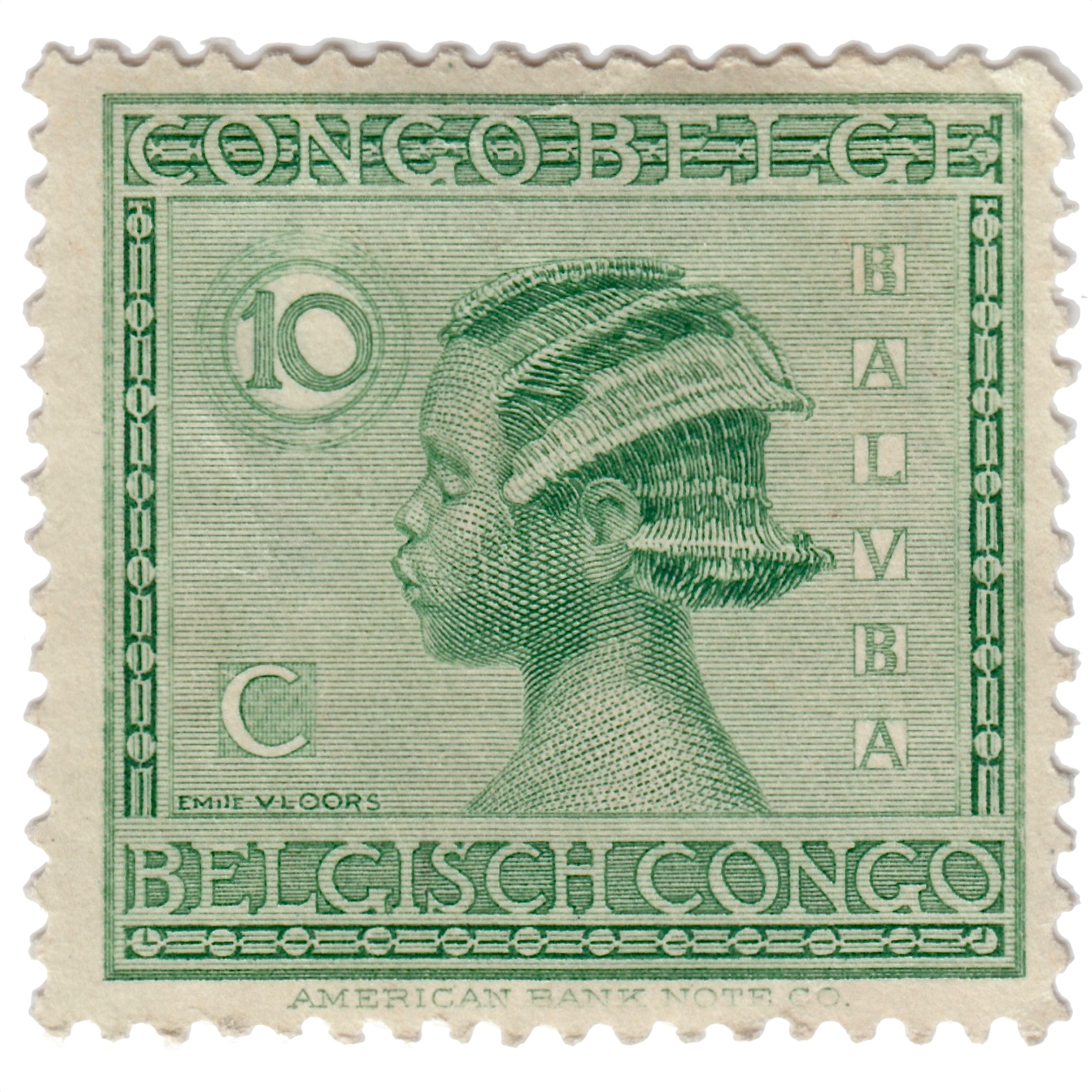 I read a piece in the New York Times the other day: An Inverted Jenny Surfaces. The Flawed Stamp Had Not Been Seen Since 1918 and it got me thinking about my own stamp collection (and yes, I was hoping I might have another copy of the inverted Jenny).

My late father inherited his father’s and his uncle’s stamp collection and I inherited my father’s collection and his younger brother’s. The stamps in these various collections are spectacular: both U.S. and lots of other countries. My father liked French, Belgian, and English colonies in Africa and I have many of those (see above and below), his father liked U.S. commemoratives and air mail stamps. The collections are far ranging and fascinating as many countries represented don’t exist anymore. So, collections like this one are a wormhole into a time that’s long gone, except for Wikipedia and the like.

I merged all the collections into fewer albums and kept it up until I went away to college in 1971. The collection was in my mother’s house until she died in 2016, then I had to bring it home.

There were two large boxes of albums, tools, smaller boxes of loose stamps, some of them needing to be soaked off of envelopes. You see, even though I wasn’t actively collecting since 1971, I was still corresponding with people all over the world and when I got envelopes back with interesting postage I tossed it in a box.

Last year I went down to New York and the Javits Center for a big philatelic (stamp) show. It was mind boggling and fun although one thing I learned for sure: stamp collecting is out of vogue and my collection is probably not worth much to anyone except me.

What to do with all of these great stamps?

Understand that not only are these stamps pieces of history, many of them are also marvels of printmaking and they’re beautiful as art objects.

Besides my now old and musty stamp collection (I have to take an antihistamine when I open one of the boxes) I also collect matchbooks and boxes, and many other pieces of interesting ephemera.

A while back I posted a video on Collectors and collections and another on Jane McDevitt’s Eastern European matchbox labels which sort of zero in on what I’ve decided to do with my stamps.

I was all set to set up my camera on a tripod and photograph stamps but then I realized that my flatbed scanner would do a better job and it would be a lot easier.

So, I experimented and came up with a process that I think works. Feel free to comment with ways to make this better.

1. Clean stamp (blow it off to get dust and hair off).

3. Place stamps on scanner with enough space between them (white space) to rotate them to straiten once scanned.

4. I use MacOS and I don’t like Canon’s software so I use Apple’s Image Capture to run my scanner. Settings are Color, Millions of colors, 1000dpi, JPEG.

5. Run overview scan, then scan each stamp with enough border so as to straighten it later.

6. Drag all the scans into Apple Photos.

9. Drag each stamp into Preview, choose “Show Markup Toolbar” then use the “Instant Alpha” tool (the magic wand on the left) to drag over the stamp’s background to make it transparent. One has to be careful with lighter colored stamps to not “leak” into the body of the stamp. This takes practice. Practice on copies. Alternatively use Photoshop or Pixelmator do do the same with dedicated tools.

I reached into a box and pulled out a few hundred stamps of various kinds that weren’t mounted. These are just a random sample of French and Belgian colonies from the 1900’s. I have thousands of these from Africa, the Pacific islands, and other places that were colonized at the time. Not to mention all sorts of other stamps. This is my start… 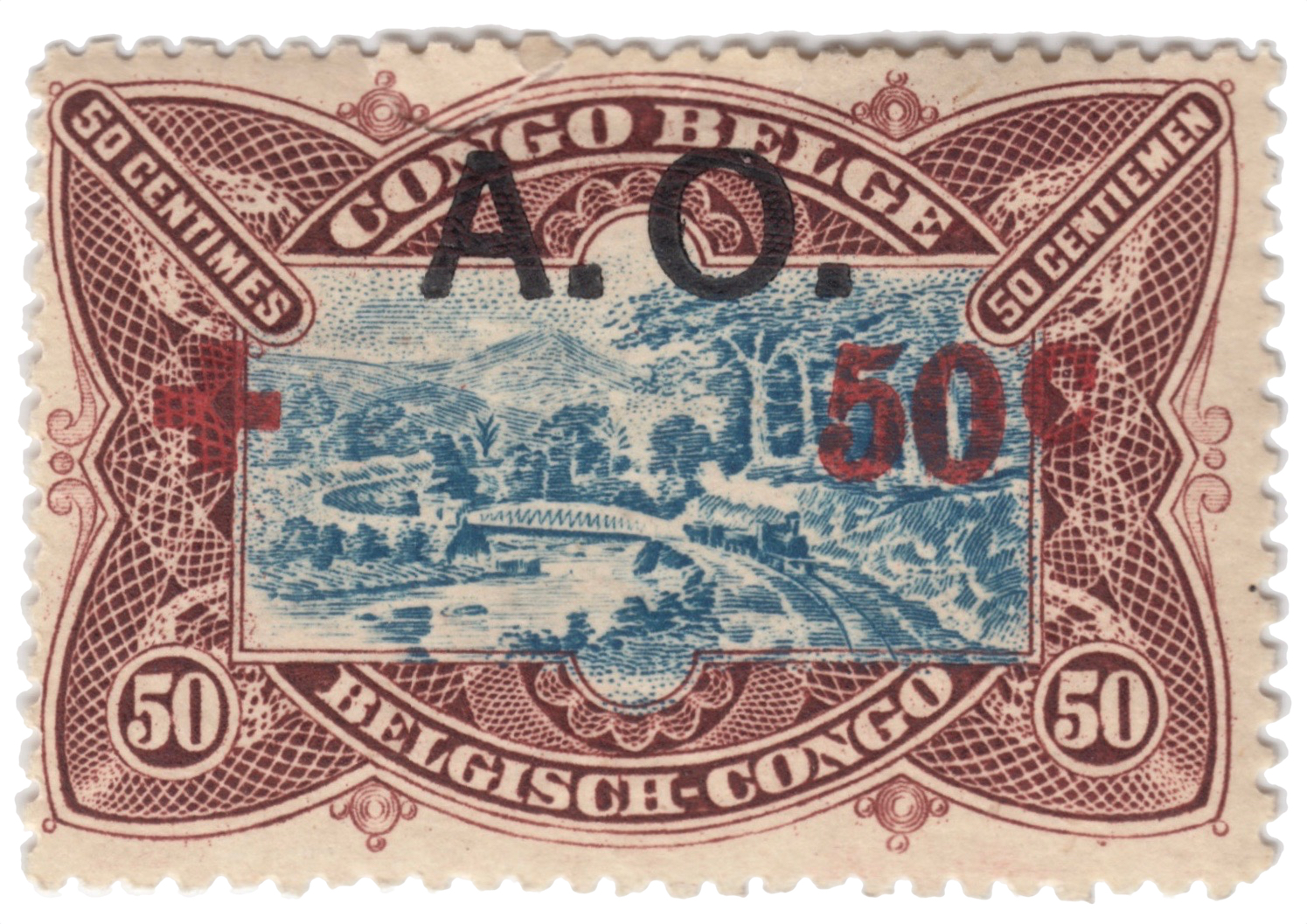 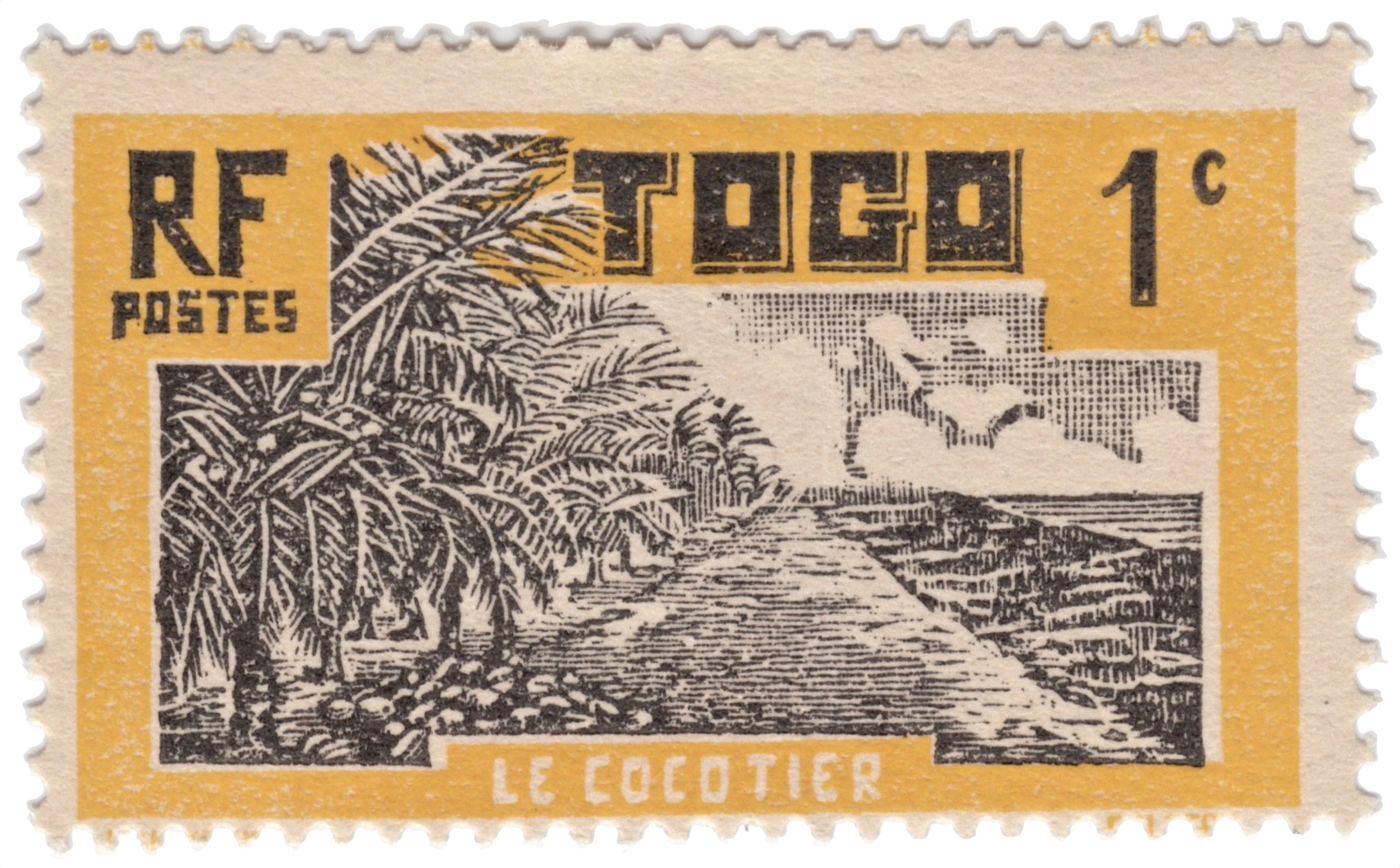 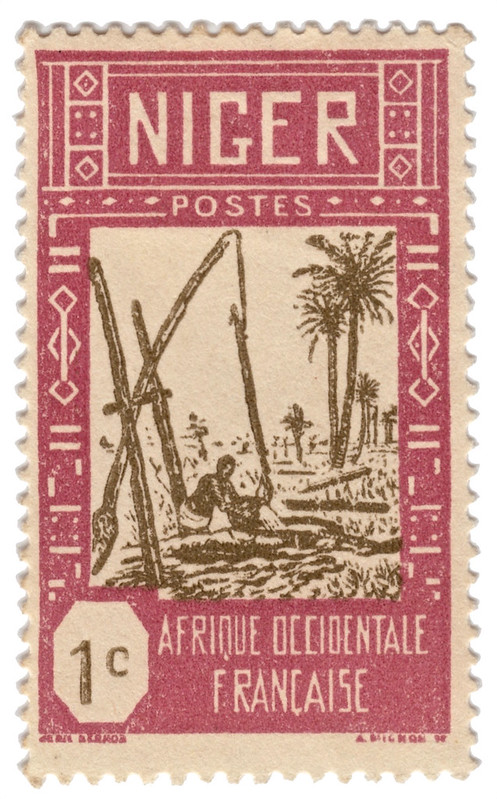 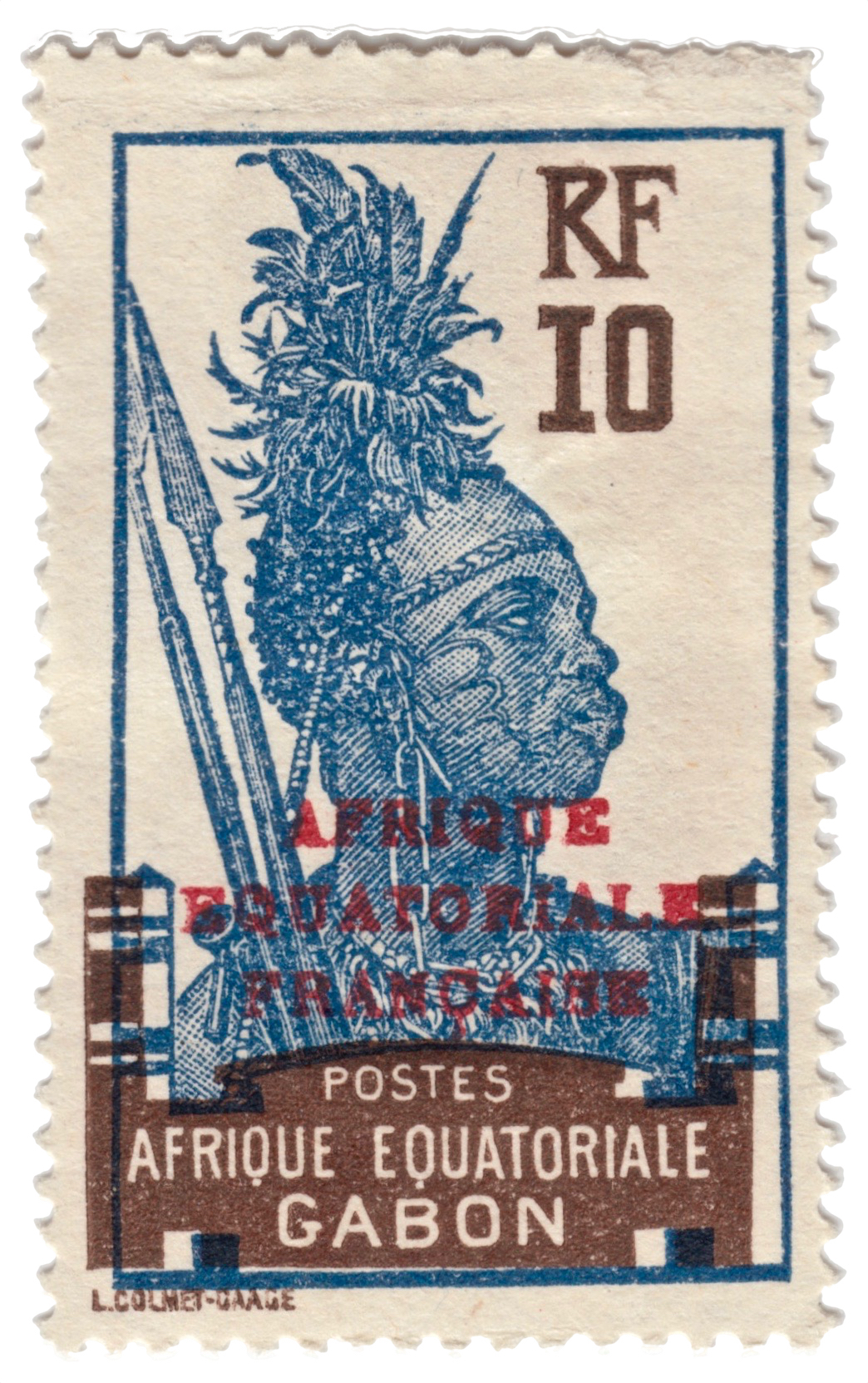 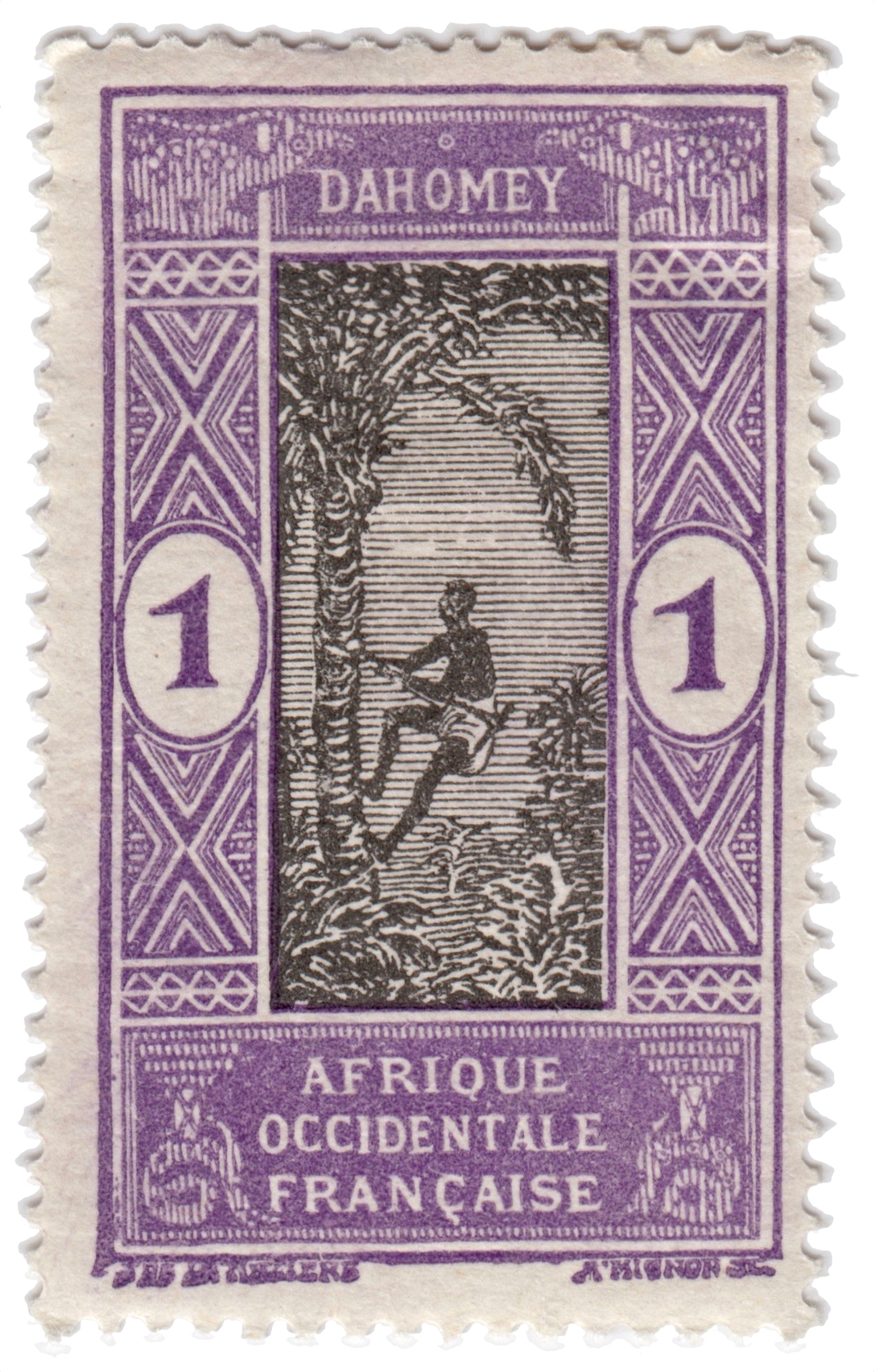 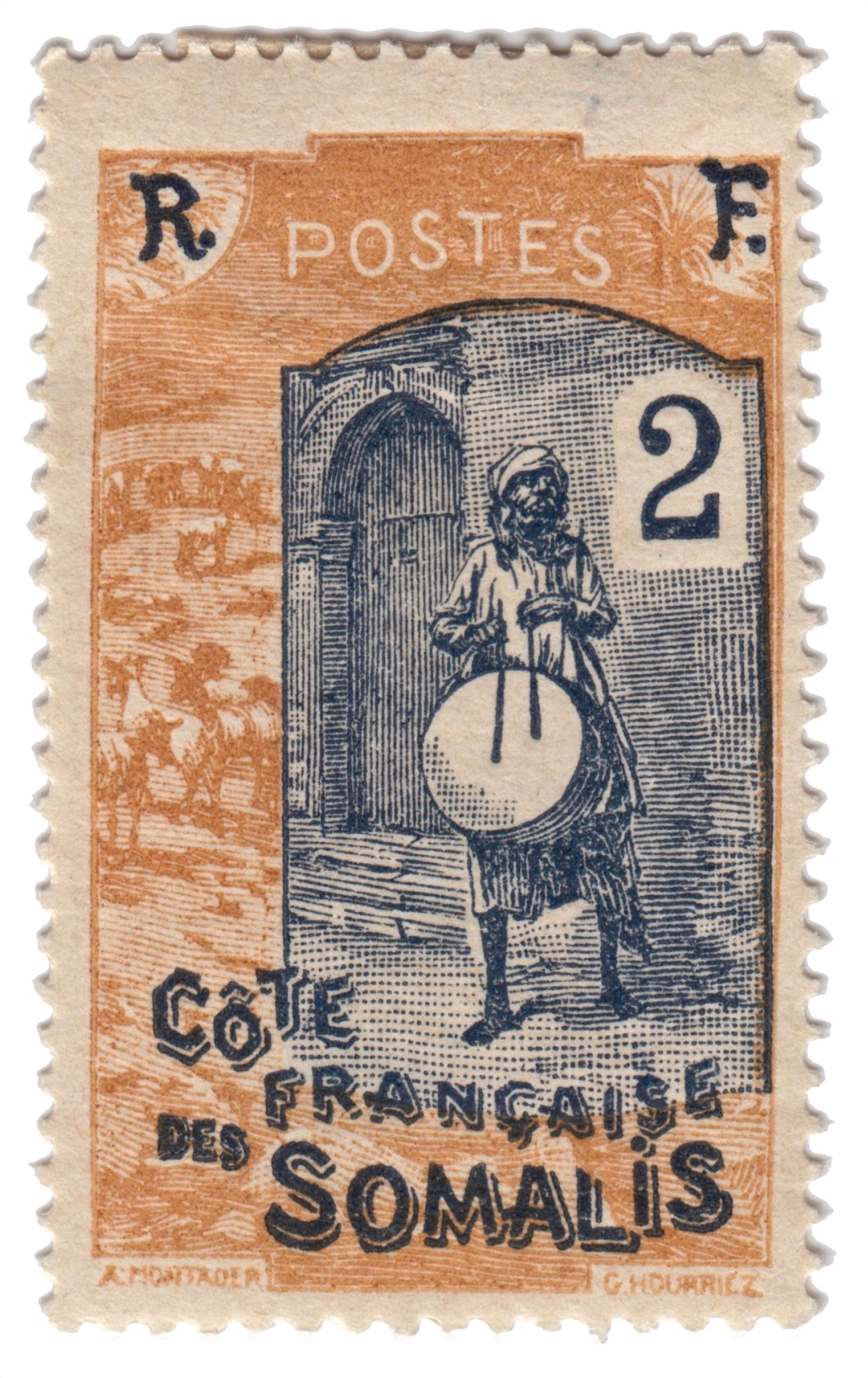 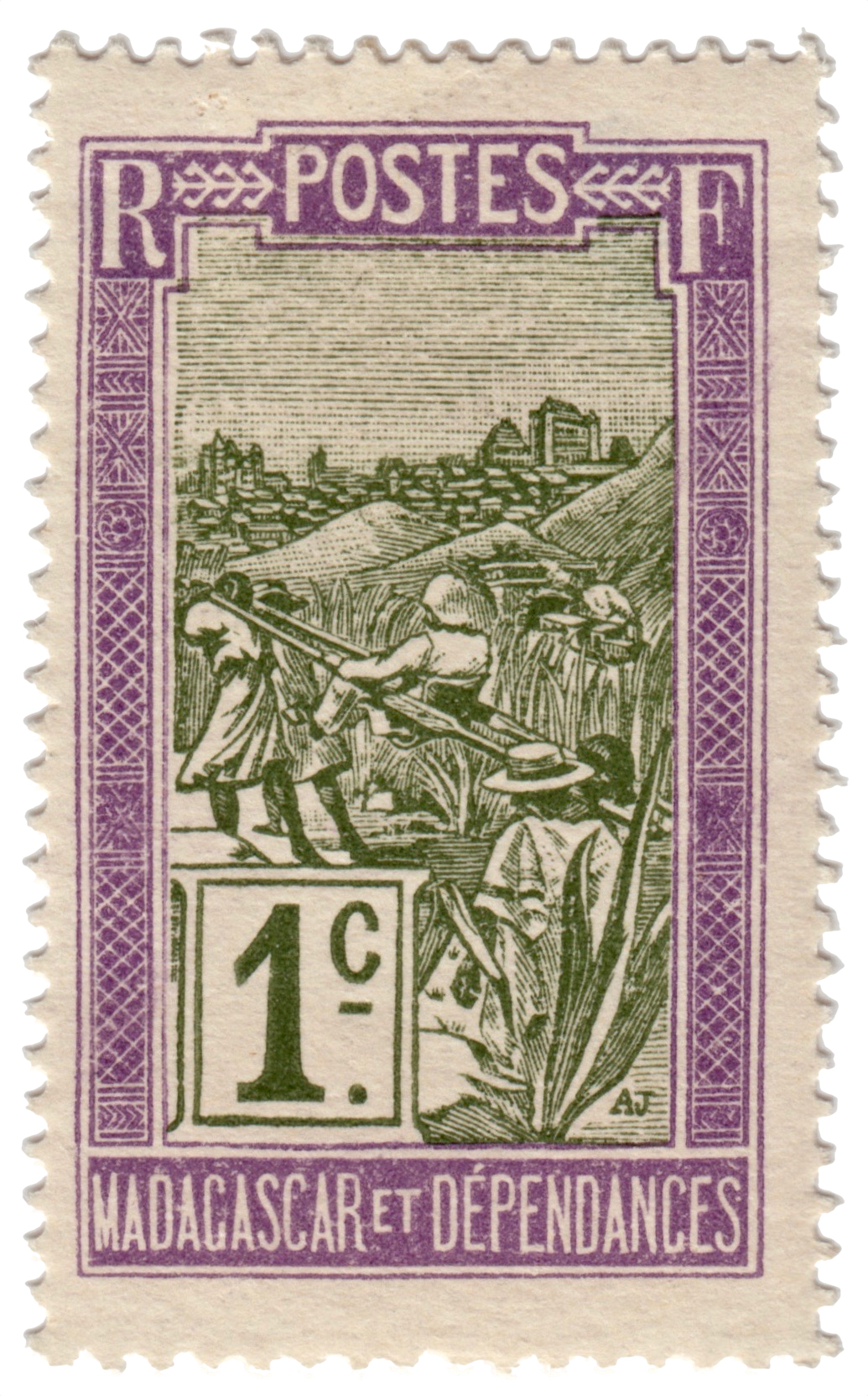 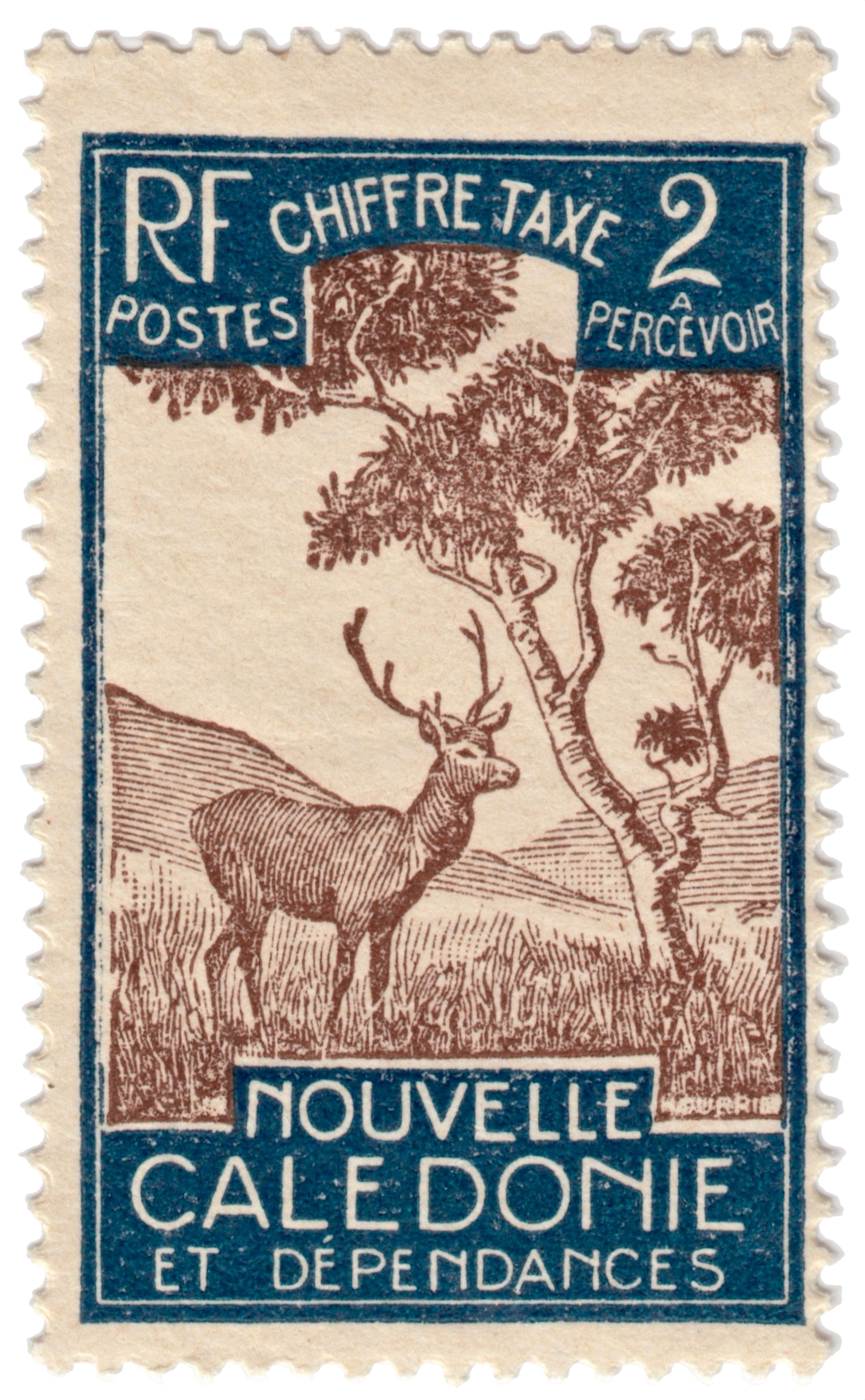 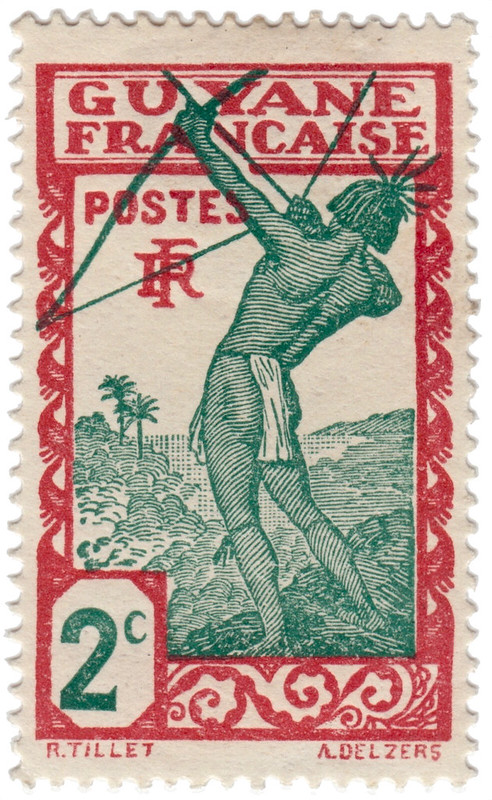 “Emma Gaggiotti Richards was an Italian painter who lived from 1825 to 1912. During her lifetime, she painted for royalty, for women’s rights activists, for patrons across Italy, and for herself. The painting featured in the short film above is a self-portrait, meticulously restored with skill and attention by Julian Baumgartner of Baumgartner Fine Art Restoration, the oldest conservation studio in Chicago.”

[via The Kid Should See This] 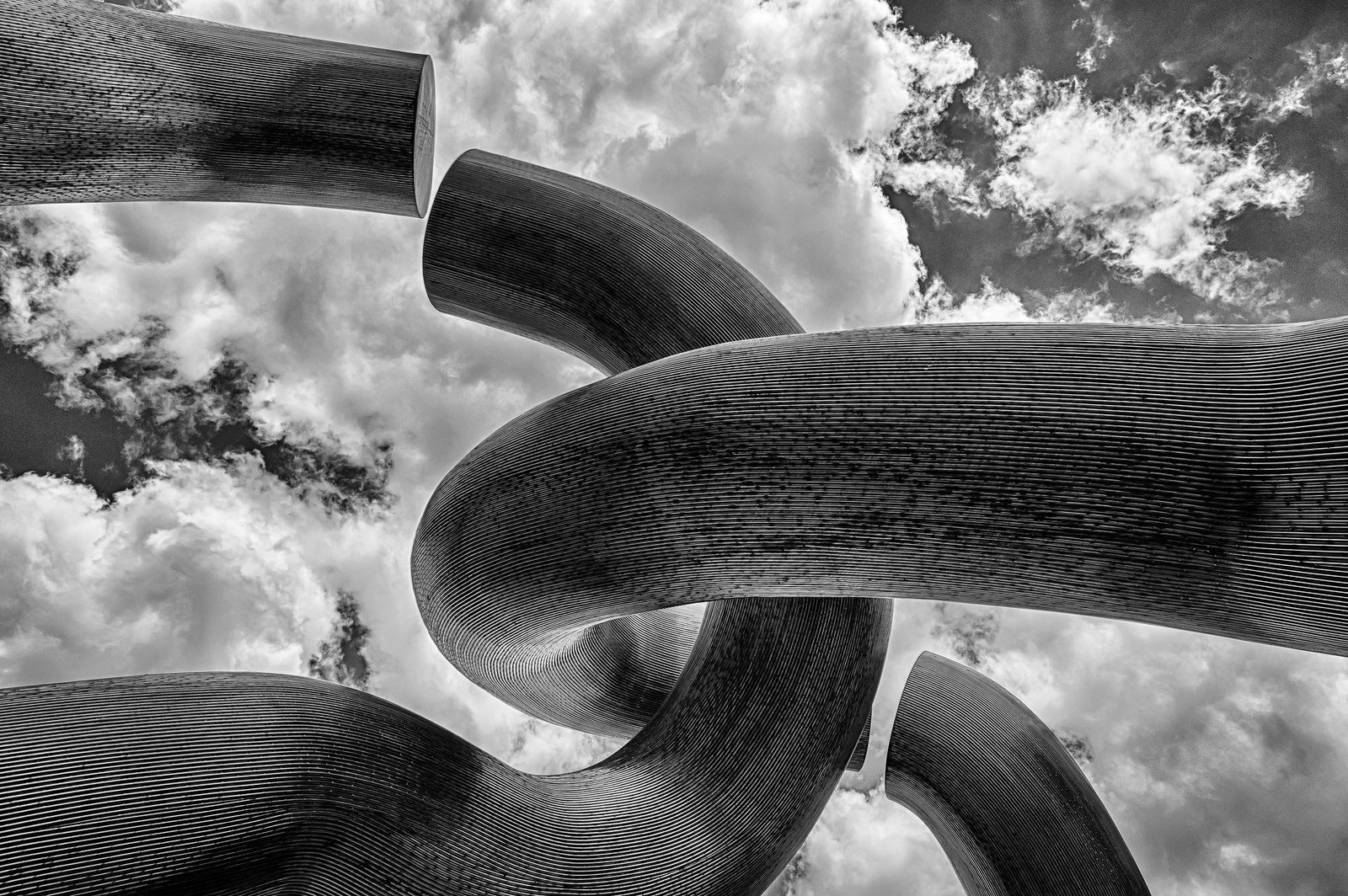 My Flickr contact Werner Schwehm posted this dramatic image of steel sculpture from below, taken in Berlin, Germany. Another great perspective image.

French photographer JR who I posted about in 2008 with his Women are Heroes Project has since received a TED Prize and gone on to a new project called “Inside Out” which the video above documents.

I’m curious about the printing process: it’s very fast, low resolution monochrome, and on thin paper. It would be fun to have a printer like that to make wrapping paper.

Sorry, I attempted to embed the video but the NY Times embed code doesn’t seem to get along with WordPress. Follow the link for the video, its worth it.

This is a brilliant remembrance of Colin Levy’s grandfather. More on this story here. 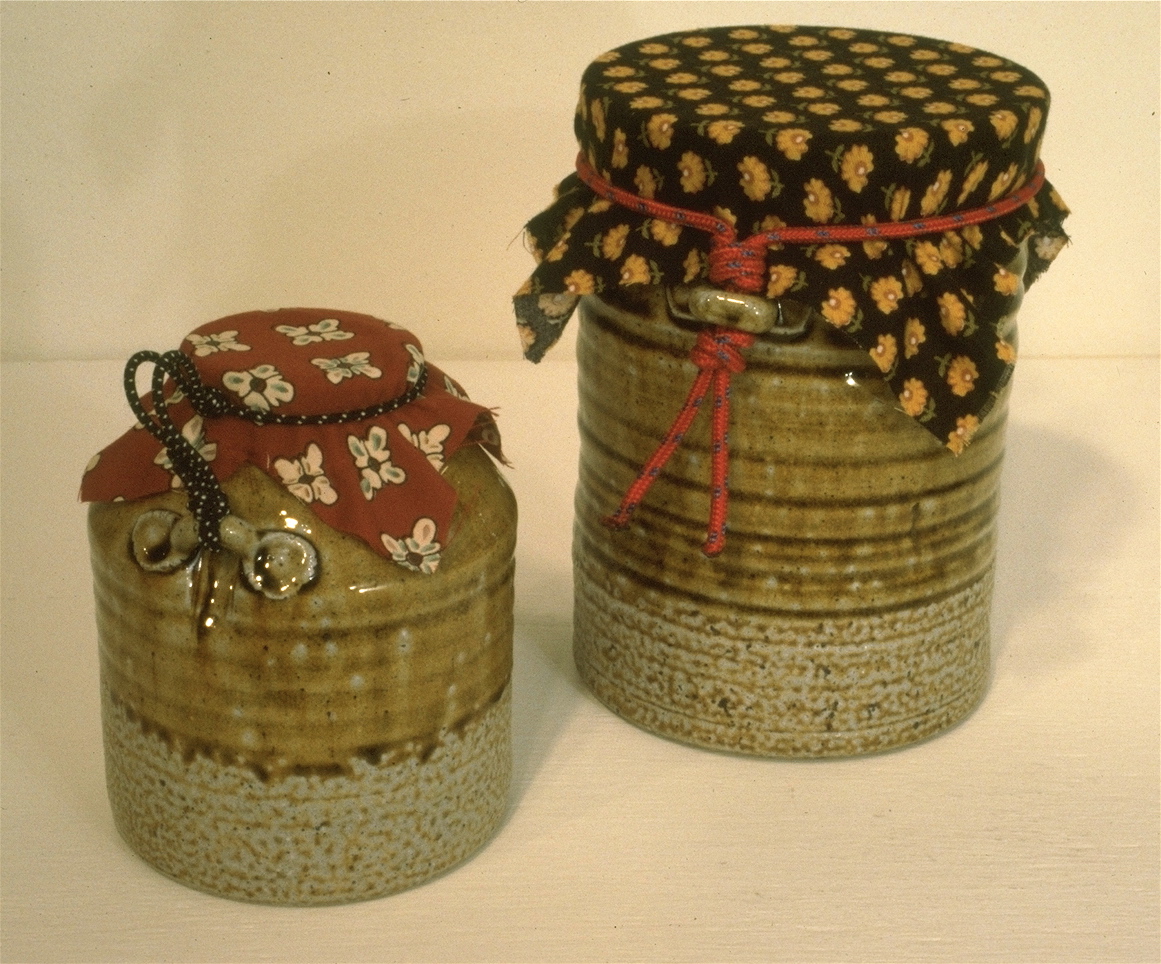 This was originally posted in 2005 on my old site which is no longer public but given my recent posts on climbing, I thought I’d give a bit of context to how climbing leaked out into other parts of my life.

I made these containers 30 years ago during my undergrad days at the University of Oregon Art and Architecture school. They are salt-fired stoneware with a temoku (dark iron) glaze that interacted with the salt.

The experiment was mixing media. I was an art student but also a serious rock climber and loved climbing gear so tried to work my love of perlon rope, knots, and Japanese printed fabric into my pieces as well.

These two were two of hundreds of experiments I did mixing other media into my work and the result was both visually interesting and also functional and useful.

This photo was scanned by Kodak years ago from a slide I took even more years ago so it’s not the best, but it’s all I’ve got because of this pair, only the piece on the left remains.

This was originally posted in 2004 but given my recent posts on climbing, I thought I’d give a bit of context to how climbing leaked out into other parts of my life.

In the old days, a long time ago (1970-1980) I was a potter and made a living selling wares and teaching ceramics. Most of the photos of my work are in slide form and I have not gotten around to scanning them. Here are a few that I have. 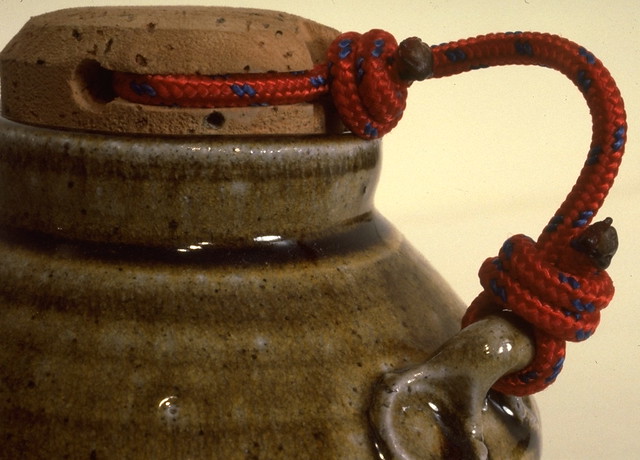 This is a small stoneware “jug” that had a “temoku” glaze on it and was then fired in a wood-fired kiln with salt tossed in (salt fired). At the time I was doing this work I was also getting seriously into rock climbing and I loved all the perlon rope and knots and such. So, I experimented with combining old and new. 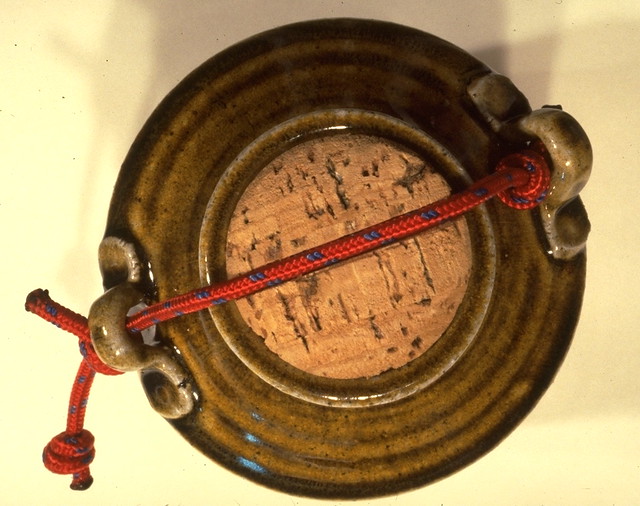 This is a top view of a similar piece, different way of securing the cork. The knot on the underside of the lug slides so that the loop on top loosens and tightens to hold the cork in. 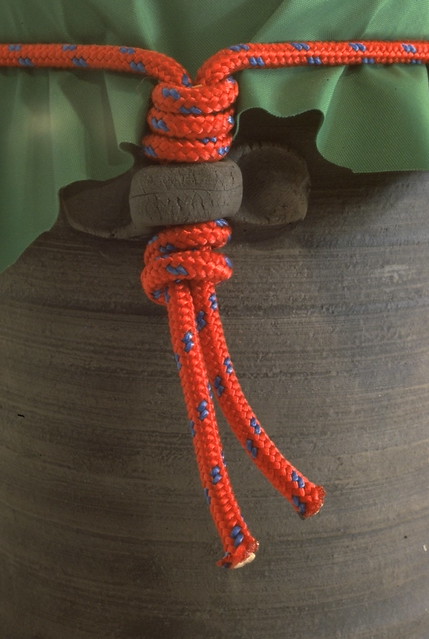 This piece is raku fired: quickly at low temperature. Being the outdoor type I was eating a lot of dried fruit at the time and had built a fruit dryer to make my own. This new material came out called Gortex and so, I bought a piece and put it on a pot, with some fruit inside, thinking that the way it dealt with water would allow the fruit to dry without spoiling (water vapor would go out, but no air would come in). It didn’t’ quite work that way but I liked the colors. This piece also uses a slider knot to tighten and loosen the perlon cord.

Joy Brown On Broadway from Wheelhouse Communications on Vimeo.

From May 2017 through yesterday, February 22, 2018, Joy Brown's
(http://joybrownstudio.com) sculpture exhibition of 9 bronze works has been on display on the Broadway Malls of the Upper West Side up to Washington Heights.

This exhibition was organized with the cooperation of the New York City Department of Parks & Recreation and the Morrison Gallery of Kent, CT in conjunction with the Broadway Mall Association (http://www.broadwaymall.org).

These huge sculptures have been a delight to see during the last three seasons. To call them gigantic is an understatement, but that belies the warmth and tenderness found in them. To see them calmly lording over unruly Broadway pedestrian and automobile traffic, always brought a smile.

Evan Fairbanks took his camera to artfully document them, intrepidly, in rain, snow and occasional sunshine.

Here’s my post on the installation of the pieces last May: Joy Brown on Broadway.